Welcome!  You’ve arrived at the home of the Spud Kit.  Since 2007, this wonderful little amplifier has won the hearts and ears of audiophiles around the world.  Starting off as a DIY home build for my personal use, the Spud Amp later became The Spud Kit.  The Spud Kit is an entry level 2 channel amplifier kit with audiophile level performance and has undergone some pretty dramatic changes over the years.

Now in its fifth generation, the Spud Kit has morphed into a giant killer.  This humble little circuit has proven to be very responsive to tweaking and robust enough to handle a little hot-rodding if you’re so inclined.

The first generation Spud Kit was offered in limited quantities for fellow DIYers.  The kit featured a

laser cut chassis, mitered wood box, all components and a detailed build tutorial on CD ROM.  The idea was to give novice builders an entry level kit that would result in a fairly respectable tube amplifier for use with high efficiency speakers.  As it turns out, even the first generation circuit was a charmer, and the Spud Kit soon earned an enthusiastic following.

Admittedly, the first generation Spud Kit had some built in compromises.  First, the output transformers were very good, but there just wasn’t enough in the design budget to include output transformers that had enough low end grunt to really do justice to the circuit.  Optimistic that the circuit could support further improvement, I commissioned Edcor to design a custom output transformer for the Spud Kit.  The updated OPT’s were bigger, but a little reorientation allowed them to fit into the existing chassis.  First generation Spud Kit owners were offered the opportunity to upgrade to the second generation OPT’s.  This along with a new circuit layout and some parts upgrades made up the bulk of the second generation improvements. 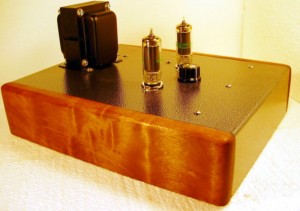 option.  Of course, there were a few other component upgrades in addition to the cosmetic changes.  Up to this point, the cost of the Spud Kit had remained the same as the first generation, and upgrades and design costs were eating up any profit potential.  The Spud Kit was a labor of love, and the low volume sales, upgrades, design mistakes and circuit improvements soon caught up with my limited discretionary budget for the project.  I decided to retire the Spud Kit, but a fellow enthusiast urged me to keep it up.

The Spud Kit has come a long way over the last several years thanks to the keen interest of builders around the world.  With its incredible performance, modest price and utilitarian good looks, the Spud Kit is the amp you have to hear to believe.

© 2023 The Spud Kit. Created for free using WordPress and Colibri